This week for the Outdoor Hour Challenge we're doing #44 Mammals: Rabbits and Hares.  The Handbook of Nature Study website is a wonderful resource, and the girls and I have been enjoying incorporating more nature walks and study into the weekly homeschooling schedule.

1. Read pages 214-219 in the Handbook of Nature Study.  In this case, I would actually mark sections to read to your child about rabbits as a way to introduce them to an animal they probably haven’t seen in the wild. You do not need to read the whole section on rabbits but only as much as you think they will be interested in hearing. If you are using The Burgess Book of Animals, you may wish to skip reading from the Handbook of Nature Study to them altogether.

Although few of us will have access to a real rabbit of any sort to study up close, children will enjoy reading about the rabbit and then remembering some facts about rabbits for any future opportunities that may arise. Be creative and see if you can visit a pet shop that has rabbits that you can observe or let others know that you are studying rabbits and they may know someone who owns a rabbit that you can study with your children.

Below are some interesting facts about rabbits that are in the book Handbook of Nature Study:

The cotton-tail thrives amid civilization; its color protects it from sight; its long ears give it warning of the approach of danger; and its long legs enable it to run by swift, long leaps.

The cotton-tails are night wanderers and usually remain hidden during the day.

In summer, they feed on clover or grass...herbs...sweet apples and fresh cabbage.  In winter, the long, ganwing teeth of the cotton-tail are sometimes used to the damage of fruit trees...since the rabbits are obliged to feed upon bark in order to keep alive.

Branches from an apple tree that the rabbits
ate during the winter.  Rabbit pellets are on the snow as well.
If [the ears] are set back to back and directed backward, they indicate placidity, but...is always on guard; if lifted straight up they signify attention and anxiety; if one is bent forward and the other backward the meaning is: "Now just where did that sound come from?"

The rabbit has an upper and lower pair of incisors like other rodents, but on the upper jaw there is a short incisor behind each of the large teeth; these are of no use now but are inherited from some ancestor which found them useful.

The strong hind legs...enable it to make...jumps, of eight feet or more.

There are five toes on the front feet, and four on the hind feet; the hair on the bottom of the feet is a protection, much needed by an animals which sits for long periods upon the snow.

Rabbit tracks in the snow.
The general color of the rabbit fits in with natural surroundings.

Fur in the snow from a rabbit.
Young rabbits are blind at first, but when about three weeks old are sufficiently grown to run quite rapidly.

Fox, mink, weasel, hawk, owl, snake and occasionally red squirrel all relish the young cotton-tail if they can get it.

An eagle at the National Eagle Center in Wabasha
being fed rabbit meat during a presentation.
2. Supplemental reading in The Burgess Animal Book for Children: Read Stories 1-3. After you read each chapter, stop and pause for a little discussion about the animals in each story. See if your child can narrate back to you a few facts about each animal. If narration is new to your child, you may need to prompt them at first but it does get easier as you practice. Use the illustrations if you need to get them started.

“The purpose of this book is to acquaint the reader with the larger groups-orders, families, and divisions of the latter, so that typical representatives may readily be recognized and their habits understood.” (The Burgess Animal Book, Preface)

I read the following stories to the girls from The Burgess Animal Book:
- Jenny Wren Give Peter Rabbit an Idea
- Peter and Jumper Go to School
- More of Peter's Long-Legged Cousins

We all enjoyed learning more about the marsh and swamp rabbits - both of which spend about half their time swimming.  The rabbits that are commonly seen around here (in the northern United States) do not swim.  The rabbits that like to swim are found in the southern part of the United States, according to The Burgess Animal Book.

3. Spend 10-15 minutes outdoors on a nature walk. Ask your children where they think that they might see a mammal. If you have snow or mud, look for animal tracks of any kind. Look for any other signs of animals as you walk. Look for gnawing marks on trees and plants. Look for scat or cones or seeds left from a meal.

Don’t forget that you can also observe other mammals if you have the opportunity. Cats, dogs, squirrels, and horses may be available. You can draw attention to the similarities and differences between a rabbit and these other mammals. For example: How are a cat’s and a rabbit’s ears different? Why do you think they are different? How are a cat and a rabbit alike? (both have fur, both have four legs, etc.)

Yesterday, it felt like spring with all the snow melted on the property, the pond at a water level that I haven't seen in years, and many parts of the pastures and backyard flooded.  Signs of spring - bright green grass and buds on some of the trees - were already emerging.  It rained for most of the day yesterday, turned to sleet, and then overnight began snowing.  This is what today looked like: 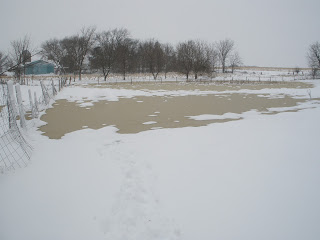 Pond in the northwest pasture and six inches of new snow.
Over six inches of snow fell.  Under that is crunchy ice.  Not many people are out and about today.  It's been very quiet. 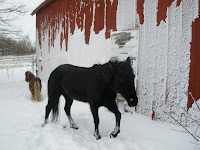 Horses behind the barn ready for some corn.
The snow is plastered against the barn. 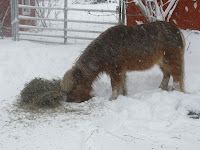 Hoss eating some alfalfa in the morning.
The snow is still coming down with no sign of stopping.
After we fed the horses, we went on a short nature walk to look for any type of tracks, particularly ones made from rabbits which have been commonly seen all winter.  We explored part of the east pasture first.  No rabbit tracks. 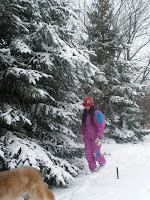 Sophia by the pine trees in the backyard.
We climbed over the fence into the backyard and walked near the big pine trees.  No tracks near or underneath them. 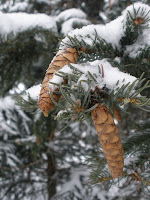 Pine cones and needles covered with snow.
We went to the gate that leads from the backyard to front yard.  We all liked the pattern the snow left on the gate: 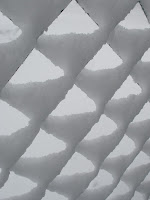 Snow on the gate.
We walked around the front yard, and found no rabbit tracks in the yard or under the pine trees in the front yard where typically there are many to be found. 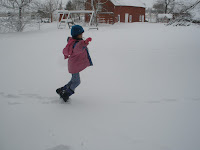 Olivia jumping between sets of dog tracks.
There were dog tracks so I had the girls jump between the sets of tracks to see if they could jump as far as the space between each set.  It was difficult for Olivia, but Sophia could easily make the jump (she's quite a bit taller than Olivia). 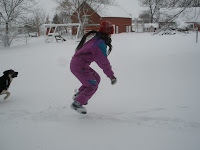 Sophia jumping between sets of dog tracks
with Gretel following closely behind her.
We even checked the brush pile in the middle of the yard where the rabbits hide and eat the apple tree branches.  No indication that rabbits have been active.

Branch of an apple tree in the brush pile
that was eaten by a rabbit.

The absence of tracks was just as an important lesson today as seeing evidence of rabbits that we normally do.  It showed us that during winter/early-spring storms the rabbits take shelter. 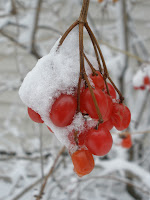 We noticed on our walk that the birds have
been eating a lot of the berries.  Not many are left.
4. For your nature journal this week, try sketching two different kinds of rabbits. Use The Burgess Animal Book as a reference or you can Google Cottontail rabbit, Northern hare, Swamp rabbit, Snowshoe rabbit, Jack rabbit. 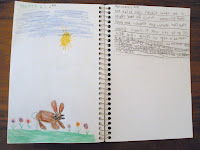 Olivia's nature journal entry about rabbits.
Sophia liked the black-tailed jack rabbit because it is the only rabbit that has black on its tail and tips of its ears. 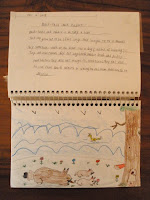 Other rabbit-related activities we've done in the past:

We made beeswax impressions.  This is one of our favorite designs.

Making gingerbread cookies for Easter
with rabbit and chick shapes.

Many years ago, the girls set up a place for the Easter Bunny
and made egg collectors with milk jugs and cottonballs.

The girls made rabbits from a half an egg, carrots slices, and green onion slices.
They used whole cloves for the eyes.

This is a hand-embroidered rabbit
I made for the nature table.

In 2007, the girls learned about Dakota Indians and
how they use to put moss on rabbit hides for babies' diapers.
This was part of Homeschool Day at the Minnesota History Center.

It was about 95 degrees this day in August 2007
with a heat index of like 295 degrees.
It was insanely hot. Sophia is determined to have pet rabbits.
Posted by Harvest Moon by Hand at 7:29 PM

Wow, looks like a great day with some really fun learning. My daughter loved looking for rabbit tracks and rabbit hide outs this winter. Our snow is gone now so no more rabbit tracks.
Love how you involved so many different types of projects and learning.

This is such a great rabbit study, pulling in so many real-life experiences along with the reading and researching. Your girls are going to remember these times out exploring in the woods together with you.

Love your barn image with the snow and horses...looks so cold!

Thanks for sharing your link and your rabbit study with the OHC.

This is one of our favorite go~to books when the boys say, "I'm bored." It always snowballs into several days of activities:)

Fantastic exploring with you! I love your horses - what kind are they?