For wheat, I chose a Cinnamon Roll Muffins recipe from Some the Wiser. This recipe makes 12 muffins. 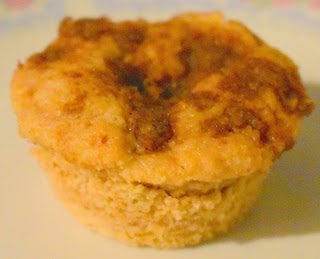 In a large bowl, sift together the dry ingredients. In a separate bowl, whisk together the wet ingredients until well combined. Make a well in the center of the flour mixture and add the egg mixture, stirring only until just combined.

Combine all the topping/filling ingredients. Gently fold half of the mixture into the muffin batter.

Bake at 400 degrees for 12 to 15 minutes, or until muffins spring back when pressed lightly. Remove from oven. Cool slightly, then transfer carefully to a wire rack.

Whisk together all of the frosting ingredients. Drizzle over the top of the muffins.

What we thought: I told Sophia and Olivia that I was making cinnamon roll muffins. They heard "cinnamon rolls" which  is quite a different thing...and for which they were very excited. As  I gathered the ingredients, I  realized that we didn't have enough all-purpose flour. Looking for a substitute, I found quinoa flour. Thought I'd use that. It looked relatively similar to all-purpose flour.

What I found out was that quinoa flour and all-purpose flour have distinctively different tastes. In terms of  removing the muffins from the pan, they crumbled. Either they were too hot and needed to sit for a bit or it was quinoa flour.

The frosting did not taste good. It was not smooth and the cream cheese only made it taste tart. A  plain powdered sugar/milk/vanilla frosting would have been better. (As a side note: when I was discussing this recipe with friends they said that cream cheese should be at room temperature to get it to blend well. If it came directly from the refrigerator, there will be lumps in whatever you are making.)

Would I make these again? No...even with all-purpose flour. Cinnamon rolls taste a lot better.

For Monday's recipe, I made a Rice Cake with Yogurt and Fresh Berries that I saw on Pinterest. The  pin didn't lead to anything.

Basically, you take a rice cake and top it with strawberry yogurt. Then place raspberries, strawberries, and blueberries on top of the yogurt. 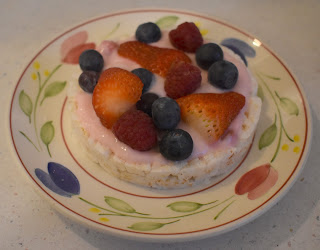 What we thought: The  first excited question came from across the table, "Oh! Is  that a tart?" Much to the disappointment of the family, I answered with what they were actually seeing. A rice cake versus pastry doesn't have a chance.

All the components tasted good together. The rice cake is dry, but the yogurt provided a nice counter-balance to it. Treated as a dessert, it was much healthier to eat than a high-sugar alternative. Fresh berries - picked right out of the garden during the summer - would taste even better.

Originally I was going to make waffles with barley flour. After trying some other flours - such as quinoa - and using millet and cornmeal in blueberry muffins and banana muffins; and not liking the taste (compared to all-purpose flour), I decided to skip the waffles.

Found a recipe for Beef Barley Soup from Taste of Home magazine which looked good and that I've been wanting to try. 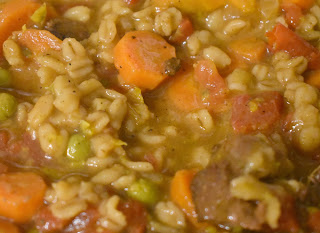 What we thought: I was the only one who would eat the soup which was fine with me since it tasted very good. The meat - which was the most expensive part - isn't necessary. If it was a vegetable-barley soup, it would have been equally as delicious. This is a simple recipe to make and I'll be making it again.

I found a pin for Tabbouleh with Millet that led to Alkaline Sisters that looked good. After making the banana applesauce muffins  that had  millet in them last month, Sophia asked  that millet not be  used in  the tabbouleh. "Whatever you normally use, could you use that?" she asked.

So, I  made a batch of millet and couscous (which I typically use) and had her taste both.  The  millet was definitely coarser in texture which she didn't like.

So, even though Wednesday's grain of the day was millet, I  made the tabbouleh with couscous instead. This is the recipe I  used: 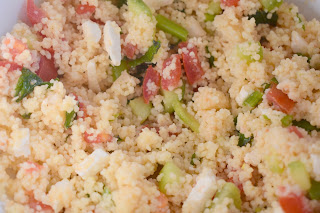 In a medium sauce pan bring water to boil, add millet and then reduce heat to low, simmering with lid on for 18-20 minutes.  Remove from heat, and fluff with fork and allow to cool with lid off for 30-60 minutes.

Combine the olive oil, lemon juice, and crushed garlic and allow to stand.  Meanwhile chop the vegetables as described above. Place in a large bowl.  Add millet when it is completely cool and then pour dressing over mixture and toss well seasoning with sea salt to taste.

Garnish with parsley or mint and serve at room temp or chilled.  Flavors will become more pronounced after resting. Yield: Approximately 7 cups.

What we thought: I have another tabbouleh recipe that I've made for many years now. It has more flavor than this recipe. However, this was still a good one to make; and we're enjoying it for lunches and dinners.

For Thursday's recipe, I made Whole Wheat Rye Challah Bread. The recipe came from a pin that led to Zesty South Indian Kitchen. 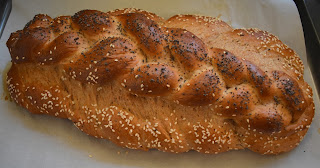 In the bowl of a stand mixer with paddle attachment, add whole wheat flour, rye flour, salt, gluten, and instant yeast. Mix everything well and set aside.

In a small bowl mix, egg, oil, water and maple syrup, add this to dry ingredients and mix everything to so that it come very sticky dough.

Change to dough hook and knead the dough for about 8 minutes or until it becomes smooth and leaves the sides of bowl. (Note: It took 12 minutes of constant mixing and it was still sticky. I added more flour and hand-kneaded the dough until it was a ball and didn't stick to my hands.)

Transfer the dough to well greased bowl cover with plastic wrap and set aside for first rise at 77 degree Fahrenheit for 2 hours.

After the first hour of rising, punch down and fold the dough and again set aside for another rise.

After 2 hours, divide into 4 equal pieces. Set aside.

Take 3 of the pieces and roll them into ropes that are about 18 inches long.

Braid the three strands attaching the tips with water and tuck inside. Transfer the braided dough into a baking sheet lined with parchment paper.

Take the remaining piece of dough and divide into 3 pieces and roll these into ropes that also are about 18 inches long. Braid the three strands and attach the tips together.

Make an indention in the center of bigger braid and place the smaller braid in the center. Set aside for about 45 minutes for the braids to double in size.

In a small bowl whisk one egg with water.

Using a brush, gently brush the egg wash on the doubled-braided bread.  Brush again so that it gets a double egg wash.  Gently press sesame seeds and poppy seeds into each section of the braided bread.

Bake the bread in a preheated 350°F oven for 35 minutes, or until its well-browned.

What we thought: Everyone liked this bread - especially when it came right out of the oven and we could eat it with melted butter. Such a treat! It is a time-consuming recipe - taking most of the day to prepare. It was worth it, though. I'll definitely make this recipe again.

This is an easy, healthy snack using oats: Apples with Raisins and Oats. The pin led to The Kitchn. 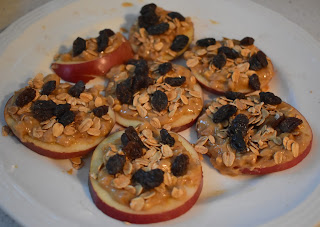 Combine the oats and cinnamon in a dry skillet over medium heat and toast, stirring occasionally, until the oats are golden. Cool before using.

Mix together the peanut butter and honey.

Core and slice the apple into 6 rounds. (If you don't have an apple corer, you can slice the apple first and then cut out the centers with a small cookie cutter or knife.)

Spread 1 tablespoon of peanut butter on 3 of the apple slices and sprinkle with raisins and oats. Top with the remaining apple slices to form sandwiches. Yield: 3 sandwiches.

Note: If you are not eating the apple right away, you can brush it with lemon juice to prevent browning. A solution of 1/4 cup water and 1 tablespoon lemon juice works well.

What we thought: Sophia and I tasted this recipe and we both liked it. She picked the raisins off the apple slices, and I kept them on. It was an easy-to-make side addition to breakfast and lunch (one apple with all the toppings is too much for one person to eat in one sitting. The apple sandwiches were filling and could easily be a breakfast in and of themselves.

The girls have been eyeing the blue corn chips in the cupboard all week. Told them they needed to wait until I made the Crunchy Jicama Salsa with Blue Corn Chips recipe that I saw on Pinterest and that led to My Recipes. 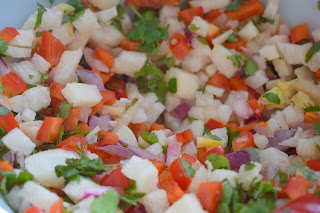 What we thought: Sophia and I tasted the salsa and chips; and Olivia ate only the chips. The salsa on its own is fresh and crispy rather than a more typical sauce-like consistency like others salsas.

Sophia suggested adding a bit of salsa  in a  jar that we had on hand and that changed the flavor and consistency.  Having the crispness of  the jicama salsa blended with the smooth salsa was delicious. It was a  perfect complement to the blue corn chips.
Posted by Harvest Moon by Hand at 12:00 PM

Out of all of these the barey soup and the bread looked the most tempting to me. Fun to see your experiments and hear what you all thought of them. :)