Got six more bags out on March 13th - 4 recycling and 2 trash. They came from both the kitchen and Sophia's room. We are continuing to eat the food we have on hand and use it - so those containers generally go in recycling. 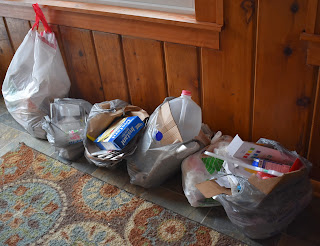 One major project was cleaning some of Sophia's room - under her bed, nightstand, and desk. This was a good way to get rid of magazines and papers that she no longer wanted.

Also was able to get a couple of bags of trash out of these areas. There is still quite a ways to go in terms of simplifying her room and making sure it can be kept neater than it has in the past. I think the less she has to organize, the better for her.

The other decluttering project was the area next to my bookshelf in my office. When I inherited a lot of items from my parents, I put items where I could find the space.

The focus for this project by the bookshelf was simply to find a place for items to go - whether it be in a closet, the trash, recycling, or donation to the secondhand store. I was able to get rid of five bags - 4 recycling and 1 donation. 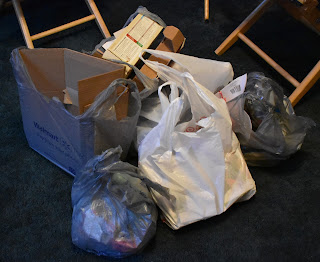 Items from my office that can be recycled or donated.

Although there are replacement tiles on the floor and the breadmaker, there isn't room in the closets to put those items away. That will come at a later time in the year when more areas are streamlined. 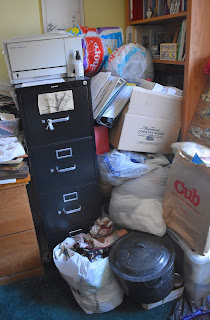 The area by the bookshelf had items I inherited as well as
things that needed to be placed in closets.
After putting things away or getting rid of them (below),
I have access to the bookshelf again which is good. 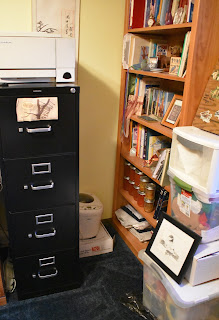 So, this week I got rid of 11 more bags. The total count of bags we've thrown away, recycled, or donated during the 2017 challenge:  31! Only 9 bags left and I've reached the goal for the 40 days. I'm going to keep going, though. Seeing things become more streamlined is very motivating.
Posted by Harvest Moon by Hand at 7:54 AM