52 Weeks to an Organized Home: Organizing refrigerator and freezer (Week 4)

At any rate, we having a lot of problems with our refrigerator in that it kept freezing everything in it. This was going on since the summer. Some of the food we can simply thaw and reheat. Not a huge problem. Other items - like produce - is a complete waste.

So, on Monday, February 13th, I threw away all the food from the refrigerator that was frozen. Ended up being 1 1/2 bags of trash (the big white kitchen-size bags...not the little store bags with handles). I looked at the money lost...the food lost. Just way too much waste. I didn't take photos. It was too depressing.

Since then we have been using what we have had on hand - in the refrigerator, freezer, and cupboards. 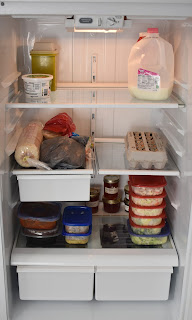 Top shelf: Pickles, dip, and milk.
Second shelf: Bread and eggs.
Meat drawer: Meat and cheese.
Third Shelf: Leftovers (main dishes) on the left and
salads on the right. There are some jellies/jams in the back.
Fruit and vegetable bins on the lowest levels.

Trips to the grocery store to buy food have been less frequent and cost significantly less. We are only buying what we run out of that we want to replenish and will consume. 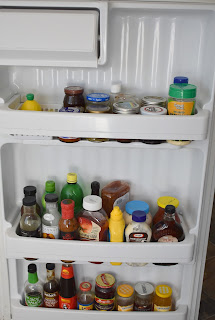 All of the sauces, condiments, and dressings are ones we use.
Tossed ones that we didn't like and
were just taking up space.

As the quantity of food has decreased, nothing has frozen in the refrigerator. So, I'm wondering if it was because there was too much food in either/both parts of the refrigerator/freezer that it was causing the problems.

The freezer is divided into sections. The top shelf has ice cubes on the left side (with an extra one in the main part) and dinners on right.

On the lower level in the bins are meat (left side) and vegetables (right side). Fruit is in the middle. 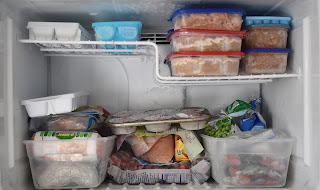 On the freezer door, there's butter, pie crusts, and ice blocks on the top shelf; and ice cream and homemade ice cream sandwiches on the lower shelf. 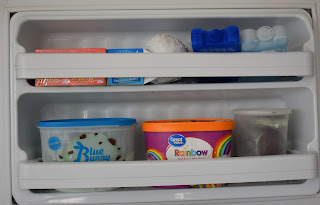 Normally we don't have that much ice cream. It was St. Patrick's Day on Friday and a recipe used mint chocolate chip ice cream.

There's one more large freezer to go through. However, it is in the unheated mudroom and it is still cold outside. In June I will go through that freezer and empty it, defrost it, and choose what items go back into it. There should be plenty of room by then to hold the upcoming summer's produce that I freeze for use during the fall, winter, and spring.
Posted by Harvest Moon by Hand at 6:09 AM