William Wordsworth (April 7, 1770 – April 23, 1850) was an English Romantic poet who, with Samuel Taylor Coleridge, helped to launch the Romantic Age in English literature with the 1798 joint publication Lyrical Ballads. 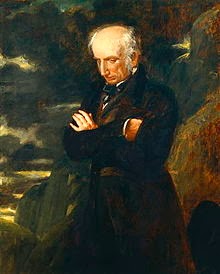 Photo Source
Wordsworth's greatest single work is generally considered to be The Prelude, a semi-autobiographical poem of his early years which he revised and expanded many times. It was posthumously titled and published, prior to which it was generally known as The Poem to Coleridge. Wordsworth was Britain's Poet Laureate from 1843 until his death in 1850.

He was the second of five children born to John Wordsworth and Ann Cookson. His sister, the poet and diarist Dorothy Wordsworth, to whom he was close all his life, was born the following year, and the two were baptized together.

Wordsworth's father, although rarely present, taught him poetry, including that of Spenser, Milton, and Shakespeare, in addition to allowing his son to rely on his own father's library.

After the death of their mother, in 1778, Wordsworth's father sent him to Hawkshead Grammar School in Lancashire and Dorothy to live with relatives in Yorkshire. She and Wordsworth would not meet again for another nine years.

Wordsworth made his debut as a writer in 1787 when he published a sonnet in The European Magazine. That same year he began attending St John's College, Cambridge, and received his B.A. degree in 1791.

Below are some of the poems that Wordsworth wrote during his lifetime. The girls' reactions to the poems follow.

My Heart Leaps Up

My heart leaps up when I behold
A rainbow in the sky:
So was it when my life began;
So is it now I am a man;
So be it when I shall grow old,
Or let me die!
The Child is father of the Man;
And I could wish my days to be
Bound each to each by natural piety.

Sophia thought: It had some hard words in it - like piety. What does that even mean? ("the quality of being religious or reverent or spirituality"). Besides having some different words, I thought it was a little too short. I didn't really like this poem.

Olivia thought: It was short...maybe too short. And I didn't hear a lot of romance in it. I liked the rainbow part because rainbows are pretty.

I wandered lonely as a cloud
That floats on high o’er vales and hills,
When all at once I saw a crowd,
A host, of golden daffodils;
Beside the lake, beneath the trees,
Fluttering and dancing in the breeze.

Continuous as the stars that shine
And twinkle on the milky way,
They stretched in never-ending line
Along the margin of a bay:
Ten thousand saw I at a glance,
Tossing their heads in sprightly dance.

The waves beside them danced; but they
Out-did the sparkling waves in glee:
A poet could not but be gay,
In such a jocund company:
I gazed–and gazed–but little thought
What wealth the show to me had brought:

For oft, when on my couch I lie
In vacant or in pensive mood,
They flash upon that inward eye
Which is the bliss of solitude;
And then my heart with pleasure fills,
And dances with the daffodils.

Sophia thought: I liked this one better because it wasn't quite as gloomy. I really liked the title. It just seems kind of funny for the reason. That's a lot of daffodils. I like the way he phrases the words and description of the daffodils - especially the line about their sprightly dance. I thought the poem was the right length.

Olivia thought: I liked the title. It kind of gave you an idea what it was going to be about - clouds and something else. I liked the daffodils...and when he mentioned crowds I was thinking about people. The poem seemed rather long.

A slumber did my spirit seal
I had no human fears:
She seemed a thing that could not feel
The touch of earthly years.

No motion has she now, no force;
She neither hears nor sees;
Rolled round in earth's diurnal course,
With rocks, and stones, and trees.

Sophia thought: When I hear this poem, I think of a cave for some reason. The spirit makes me think about a cave. I liked how he rhymed every other line because it made it sound in sync.

I have walked through wildernesses dreary
And to-day my heart is weary;
Had I now the wings of a Faery,
Up to thee would I fly.
There is madness about thee, and joy divine
In that song of thine;
Lift me, guide me high and high
To thy banqueting-place in the sky.

Sophia thought: I think I liked the beginning part better than the last part. I liked the part about going up into the clouds. I liked how he said the same lines twice because it made sound different than his other poems.

Olivia thought: I liked the ending of this poem - about the banqueting-place in the sky because I like the sky. I liked this poem the best out of all the poems I've heard by this poet so far because I liked how I could imagine that someone could fly.

Thou art laughing and scorning;
Thou hast a nest for thy love and thy rest,
And, though little troubled with sloth,
Drunken Lark! thou would’st be loth
To be such a traveller as I.
Happy, happy Liver,
With a soul as strong as a mountain river
Pouring out praise to the Almighty Giver,
Joy and jollity be with us both!

Alas! my journey, rugged and uneven,
Through prickly moors or dusty ways must wind;
But hearing thee, or others of thy kind,
As full of gladness and as free of heaven,
I, with my fate contented, will plod on,
And hope for higher raptures, when life’s day is done.

Sophia thought: He certainly rhymed this one the most. I'm not sure if the title fit the poem. Maybe the beginning part did, but not the last part. I think when he rhymed something, I focus more on the rhyming than what he had to say. I don't think I liked this one as much as the other poems..

Olivia thought: That one was confusing. It just sounded confusing. I didn't think the title fit the poem.

Stay near me–do not take thy flight!
A little longer stay in sight!
Much converse do I find in thee,
Historian of my infancy!
Float near me; do not yet depart!
Dead times revive in thee:
Thou bring’st, gay creature as thou art!
A solemn image to my heart,
My father’s family!

Oh! pleasant, pleasant were the days,
The time, when, in our childish plays,
My sister Emmeline and I
Together chased the butterfly!
A very hunter did I rush
Upon the prey:–with leaps and springs
I followed on from brake to bush;
But she, God love her, feared to brush
The dust from off its wings

Sophia thought: I liked the beginning part, but I could see us trying to catch a butterfly as he wrote about in the second part. I think maybe it should have been a little bit longer so you could see what happened to the butterfly.

Olivia thought: The title definitely fit the poem about butterflies. I also liked the ending about how the girl didn't want to get the dust off the butterfly's wings.

When in college, I was lucky enough to spend a trimester studying in London. We studied the Romantic poets with a professor from London University. We made a trip to the Lake District and visited many of the spots we had read about...climbing one of the loughs on a gorgeous spring day. It was amazing to see the landscape spread out below us as we read the poetry aloud.

Your post brought back such lovely memories. Thank you!