This week for Take a Stitch Tuesday, the featured stitch is the palestrina stitch. It is also known as the tied coral stitch, double knot stitch, smyrna stitch, twilling stitch, and old English knot stitch. 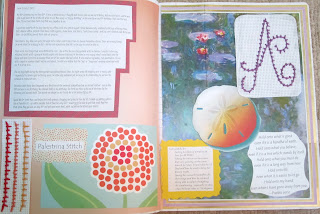 According to Sarah's Hand Embroidery Tutorials, the "palestrina stitch has its origin in Italy. Many embroidery styles from Italy have the palestrina stitch. There is even an embroidery style called the Palestrina. This stitch is usually used for outlining or bordering purposes. Any type of fabric and thread can be used to do this stitch, but perle cotton thread will give the best knotted effect."


Since I'm trying to use only the embroidery floss I have on hand, I used six strands of floss so the lines would be a bit thicker once everything was completed.


I did two different samplers. One features a letter "A" that I drew. In retrospect, I should have done this on fabric because stitching through Aida cloth where there are no holes is a tad bit uncomfortable on the fingers. I did the "A" (for Ann...my name) in purple which is one of my favorite colors. 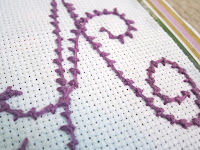 The other sampler has three different colors - yellow, orange, and red - to represent the high temperatures and dew points of the past several day. July 2nd, in fact, was about 98 degrees with a 73.9 dew point. It literally felt like 118 degrees when you were outside. It was like being roasted in an oven. 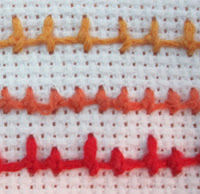 
I enjoyed doing this stitch and it wasn't as intimidating as it first looked. For each of the lines of stitching, there is an interesting, raised texture. It would be a great stitch to use on a sensory/tactile quilt or fidget blanket for children with sensory issues and/or for seniors who have Alzheimer's or dementia.
Posted by Harvest Moon by Hand at 4:06 PM

Love your A. Very pretty handwriting. Love the stitch.

Hot here, too. Dew points high. Can hardly breathe when you step outside. Supposed to keep up all week. I'm staying inside and thanking whoever invented air conditioning! ;)