From June 1st through September 4th of this year, we are doing an ABC of Summer Fun. There's no particular order of the activities. Rather, the goal is to one activity for each letter by the end of the summer.

On Friday, June 2nd, Sophia, Olivia, and I went to Osceola Rhubarb Days in Wisconsin. Rhubarb Days is a two-day community celebration. We picked the first day because there are fewer people plus there was a free picnic sponsored by Hiawatha National Bank and a farmers market. 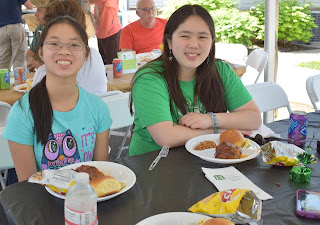 The picnic had barbecue ribs that were delicious. The meat fell off the bone - it was so tender. There were baked beans, coleslaw, a roll with butter, potato chips, beverage of your choice (pop or water), and an ice cream sandwich.

What was the girls' favorite part of the meal? The ice cream sandwich. Given that it was in the mid-80s, it did taste rather refreshing. 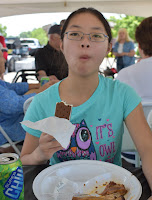 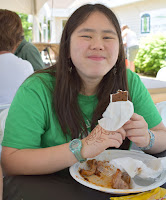 After the picnic, we went to the farmers market. We bought two borage plants and one "Bee's Friend" (Phacelia tanacetifolia) plant. I thought it was the purpose of the plant - to attract bees. Nope...that was the name of the plant itself. The seeds for this annual flower are from Seed Savers Exchange.

The girls got three honey sticks for $1.00 from a vendor who was selling a variety of honey that she bottled. It was wildflower honey - a sweet honey, she said.

Headed over to Community Homestead where there was a variety of baked goods, seasoning salts, canned items, flowers, and crafts. This is the CSA that we belong to; and I enjoy supporting them knowing that they the organic produce that we receive was grown by adults with developmental disabilities.

The adults stay at one of a half dozen houses at Community Homestead (the organization owns adjoining and nearby properties to the farm); and there is a family assigned to a certain number of adults at each home site. 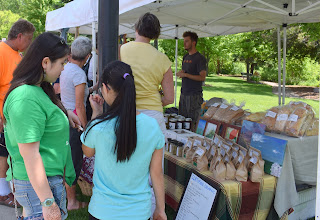 We bought a loaf of cinnamon bread there since our weekly produce boxes will begin on June 14th.

After the market, we went to Mr. Deals. Had never been there before. They get shipments of food and household items; and then mark it at bargain prices. It's not the neatest or most organized store by any stretch of the imagination...and they are the first ones to tell you that.

What they do offer are incredible deals: like 8 of the canned biscuits for only 50 cents; Tropicana orange juice (refrigerated) for $1.00; snacks that you'd pay $1-$3 for in the store for only 20 cents.

The best part: rhubarb for only 50 cents per pound! I got two bags of it...probably a good four or five pounds.

And, of course, while we were at Rhubarb Days, there was a nature lesson. The girls spotted an unusual beetle. We've never seen anything like it before. 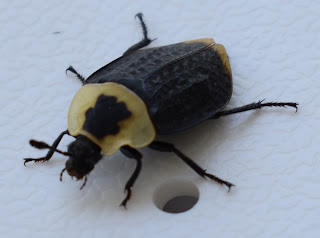 I looked up "black beetle with white Wisconsin" on Google. A beetle just like we saw was pictured. It's an American Carrion Beetle or Crusader Carrion Beetle, according to the Bug Guide. Here's more information about the beetle:

Synonyms and other taxonomic changes

In flight, resembles a bumblebee (Bombus) or Carpenter Bee (Xylocopa).

Eggs laid singly on/near carrion. Larvae hatch in a few days, feed in or under carcass, and pupate in a nearby soil cell. Adults overwinter.

So...that was Letter O for the ABC of Summer Fun. Rhubarb Days was a fun way to kick off the summer and our Summer-long activity.
Posted by Harvest Moon by Hand at 12:55 PM