When I was putting together the list of things to do for the ABC of Summer Fun, I came across the Lutz Backyard Railroad Garden. I had read about outdoor railroad gardens, but never have seen one operating in someone's backyard.

There are four times during the summer that the Lutz Backyard Railroad Garden is free and open to the public. Sunday, June 18th, was the first time for 2017. 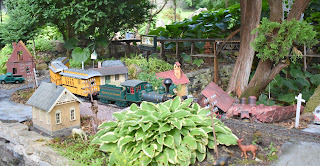 The train winds itself through little vignettes. One of the first things we saw were two rides you would see at a fair. Both had music and were operational with the horses going around and the Ferris wheel turning. 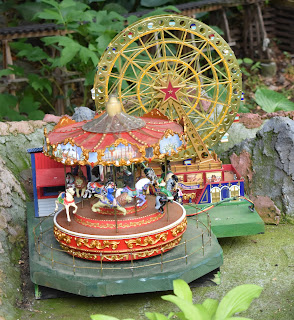 There was a volcano with smoke coming out it. 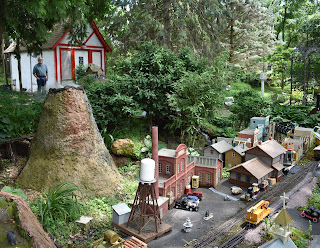 The train traveled over bridges and by waterfalls. 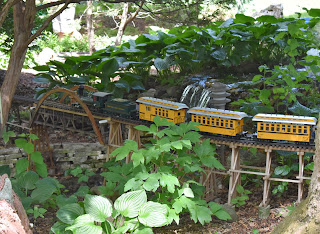 It traveled through small towns. If you look closely on the right side of the photo, there is a popcorn maker (the red stand). Every once in a while, the "popcorn" would pop up in the little glass enclosure. 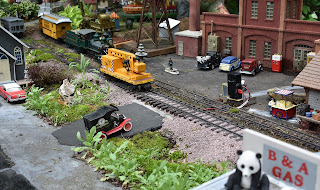 There were many water features including this fountain and multi-layer waterway that led to a mill and waterwheel. 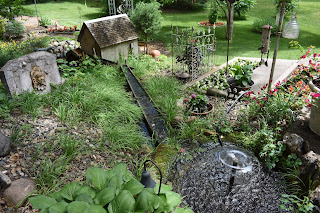 Tucked into every corner, there was something to either see or read. 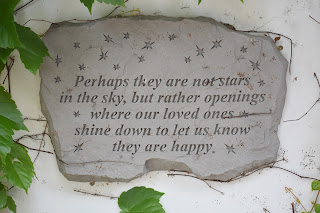 There were bridges to cross and gates to pass through. 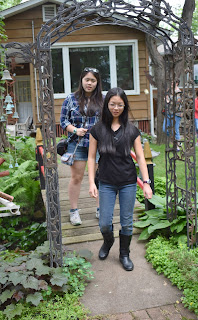 One of the intriguing things was this hand-built water contraption that would drip water down from the top into the red tubes. When they filled or got heavy enough, they would tilt and then fill the next tubes. The process would repeat itself until it filled the bottom white tube with water. The water would go up to the top again and continue the process. 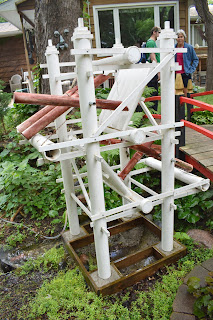 There was a little area with a gondola that moved. Each of the cars shown below would move up and down on the wire. Below it was a water fountain that would go off periodically. 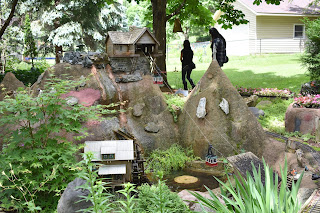 The tracks were nestled into rocky areas and between many annuals and perennials. It was an interesting combination of gardening and railroad hobbies. 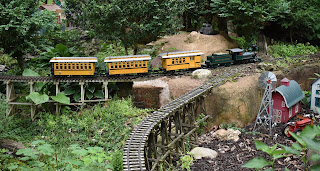 The trains and anything that can be taken or damaged by the elements are brought indoors into a shed. The trains go on the track and then there's a lift section at the end by a little door that leads to the shed. This is where things are stored. 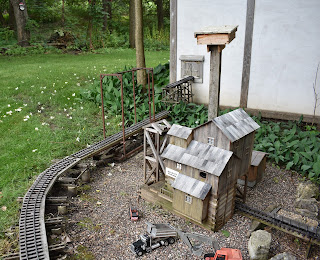 One part of the railroad garden had an emergency. Firefighters were putting out a fire. There was smoke coming out from a couple of the windows. 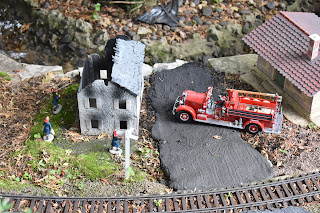 The girls were looking at one of the parts of the display.

When you see people next to the train, buildings, and plants it gives an idea what the scale of the railroad garden is and how much work is involved. 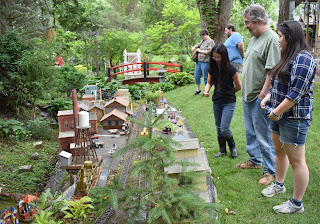 This was so much fun to see the railroad garden. There are a couple more free-and-open-to-the-public railroad gardens that are located in the Twin Cities. We are going to go to these this summer to see how others set up outdoor railroads. 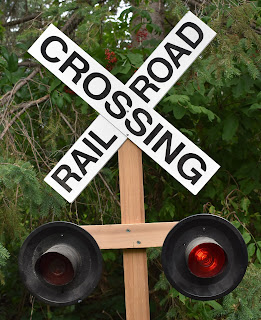 After seeing Lutz Backyard Railroad Garden, we drove about five minutes to Caponi Art Park. We hadn't been there, and I was curious to see what it looked like.

One of the sculptures was called Pompeii. 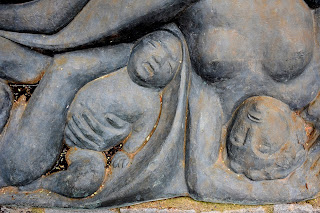 There was another interesting geometric one along the trail that wound through forests and grassy areas. 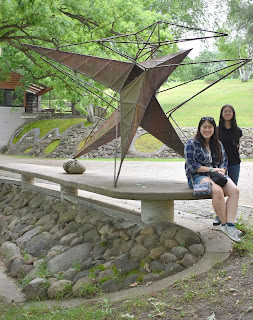 The rock work was impressive and creative. 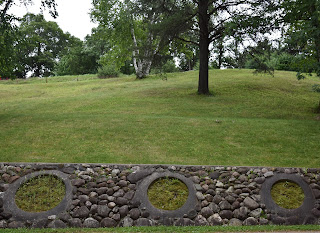 We didn't stay at the park a long time because a storm was coming in. Felt it was better to get back to the car before it started raining.

All in all, it was a fun day seeing two places that we hadn't seen before. The railroad garden, by far, was the highlight. It was inspiring, fun, and such a fascinating combination of two hobbies that we are interested in: trains and gardening.

Posted by Harvest Moon by Hand at 6:00 AM

I have never heard of a railroad garden--wow! That really was fascinating! Will be interesting to see what other ones look like compared to this first one. Thanks for bringing me along. ;)