For the 38th week of the Read 52 Books in 52 Weeks challenge, I read Son by Lois Lowry. Son is the final book in The Giver quartet. Many years ago I read The Giver and then earlier this year I read Gathering Blue as part of this challenge.

In between Gathering Blue and Son is the third book in the quartet: Messenger. I haven't read that one yet. 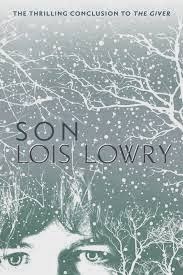 At any rate, Son is about a teenager (Claire) who had a son in a future "utopian" world. Although it is designed to have removed all the negative and challenging features of the real world, it ends up being more dystopian.

Claire was assigned the role of "Birthmother" - a lesser role in her society an one that simply views the young woman as being a "Vessel" who produces a "Product." Each Vessel is only allowed to produce three Products at which time they are re-assigned to another role in the community.

At age 14, Claire struggled to give birth to her son. Because of the challenges with childbirth, she was immediately re-assigned to work in the fish hatchery. While she was there she feels a sense of longing...of grief...of loss for the son she was never allowed to see and hold.

Conveniently, all the "Products" were raised in a building not far from the fish hatchery. Claire decides to visit there one day and ends up volunteering to help the staff. She is finally able to see her son, hold him, and spend time with him.

All the "Products" are assigned family units who will raise them. All the babies - except one - are suitable for this assignment except one: Claire's son. He is retained so that he can overcome his challenges and not be as disruptive to his future family unit.

Ultimately, it is determined that he isn't able to be placed. For that reason, he will go to "Elsewhere" (which is just another word for being killed).

A worker who feels a special connection to Claire's son ends up taking him so he doesn't go to Elsewhere. Claire, then, feels she needs to go as well.

In the process of leaving, she is warned that she will encounter a spirit of evil that takes the form of a person - the "Trademaster." Trademaster provides what people want at an expense that they cannot fully comprehend when the trade is made.

Claire does encounter Trademaster and makes a significant trade in order to see her son. In turn, her son ends up facing Trademaster to put an end to the evil that has affected many people...including his mother.

Like the other books that I've read by Lois Lowry, Son was a throught-provoking, engaging story. I have always been impressed by Lowry's writing and how she can pull a reader into a story so much that it is difficult to put the book down.
Posted by Harvest Moon by Hand at 7:26 AM

I keep forgetting about this series. Read Giver so long ago. Will have to reread first. Adding to my wishlist so I don't forget. :)