We found the part about ants who battle with one another quite fascinating. We had no idea that ants could be so aggressive towards one another. The description is engaging and we could picture the ants in battle.

As the author said, "There is a great variation in military skill as well as in courage shown by different species of ants; the species most skilled in warfare march to battle in a solid column and when they meet the enemy the battle resolves itself into duels, although there is no code of ant honor which declares that one must fight the enemy single-handed."

We also learned the difference between an ant egg (very small, oblong, and the size of a pinpoint), the larvae (translucent, like grains with one end pointed), and pupae (yellowish, covered with a parchment-like sac and resembles grains of wheat).

There are often two different sizes of ants within the same species. The large ones are called majors and the smaller ones minors.

We also used two books from the library: Creepy Creatures: Ants by Valerie Bodden and All About Ants by Sue Whiting.

Some interesting facts:
=> Most ants are black, brown, yellow, or red.
=> The smallest ants are the size of the grain of sand. The biggest ants are as long as your thumb.
=> There are about 15,000 kinds of ants.
=> If an ant is in danger it will give off a specific pheromone, alerting the other ants in the colony to be on guard.
=> An ant's nest has different rooms that are used for different things (e.g., nurseries, for the queen, food, sleeping). These oval-shaped rooms are called "chambers."
=> Most individual ants only live 45-60 days, but an ant colony can survive up to 30 years.

After we did some reading, the girls worked on their nature journals and we watched a four-minute and 52-second video on YouTube about ants making tunnels at 900 times the speed of life. It was fascinating to watch how they construct the tunnels - a world that is unseen to us.

Then we spent some of our outdoor time looking for ants. We looked on the driveway (which is gravel), in the pasture on dirt spots that the horses roll on, under rocks, and on trees.

We thought for sure that we would find ants on fallen trees, especially ones that had rotted, and had moss and mushrooms growing on them. 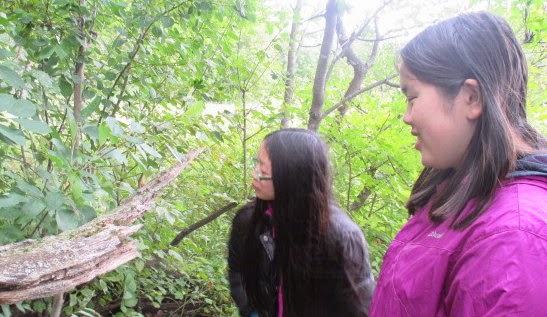 While we were near one fallen log in the wooded section of the west pasture, we found some type of fruit. We have no idea what it was so we didn't taste it. 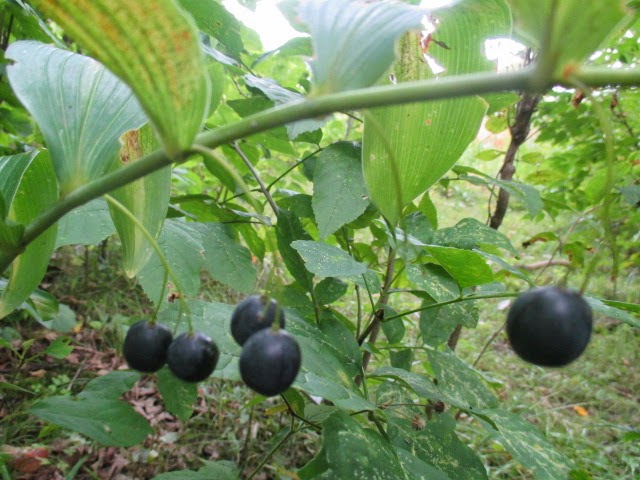 We spotted some type of insect. It was like a grasshopper or cricket, except it had a black "tail" which none of us had seen before. When we came inside, we looked up the words "grasshopper," "cricket," and "tail." The images that came up and most closely matched what we saw in the pasture were of the Field Cricket.

In our case, it was a female Field Cricket. (The male doesn't have the "tail" or ovipositor, a spike-like appendage, about 0.75 inches long, on the hind end of the abdomen between two cerci. The  ovipositor allows the female to bury her fertilized eggs into the ground for protection and development.) 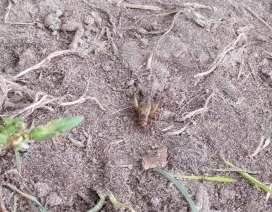 Last week, the acorns had not fallen from the oak tree yet. This week, we spotted a few on the ground as well as evidence that they are being nibbled on by some little creatures. 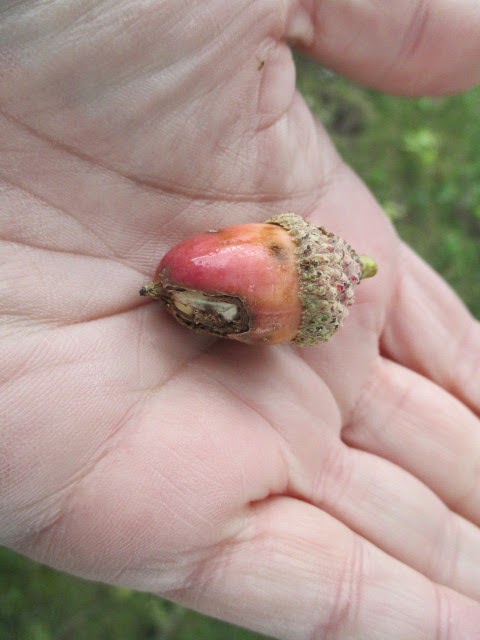 Sophia found a big woolly bear caterpillar. Initially it curled up when she picked it up, but when she gently blew warm air on it, it uncurled itself and began traveling on her hands. 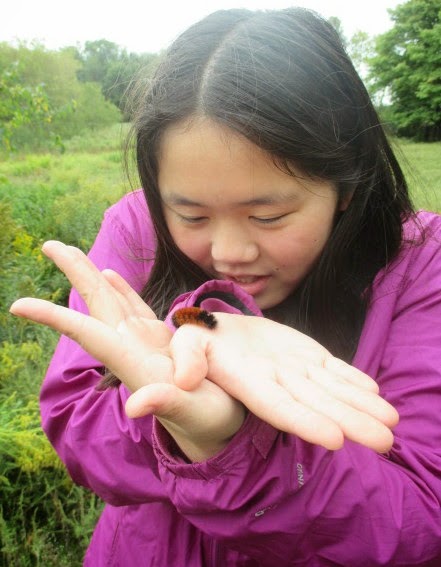 Despite all the these interesting discoveries, we were surprised that we found only two ants on tree bark of the big oak tree in the west pasture.

We headed to the backyard and found that mushrooms seem to be growing in abundance. There are big white ones. 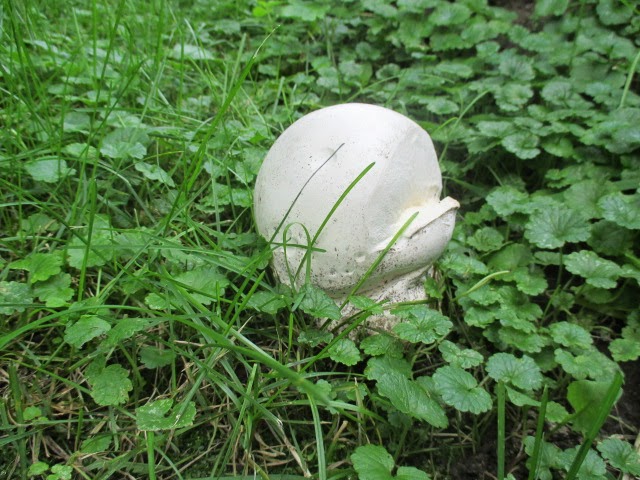 When some of them are picked, the interior is a tannish-brown color with lots of little "pores" - for a lack of a better word. 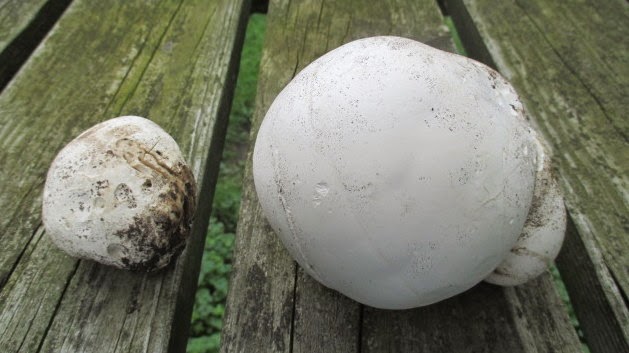 When I came in, I was curious to know what the big white mushrooms were. From what I can tell, they may be Calvatia gigantea, commonly known as the Giant puffball.

According to Wikipedia, the Giant Puffball is a mushroom commonly found in meadows, fields, and deciduous forests worldwide usually in late summer and autumn. All true puffballs are considered edible when immature, but can cause digestive upset if the spores have begun to form, as indicated by the color of the flesh being not pure white (first yellow, then brown).

Immature gilled species still contained within their universal veil can be lookalikes for puffballs. To distinguish puffballs from poisonous fungi, they must be cut open; edible puffballs will have a solid white interior.

As a side note, as I was finishing up this post, I put the above photograph on the Minnesota Mushroom Forum. Within minutes, I received confirmation that it is, indeed, the Giant Puffball; and that it is edible if the flesh is white and firm.

We also spotted this fascinating-looking mushroom that was growing new one of the new trees that we planted this spring. 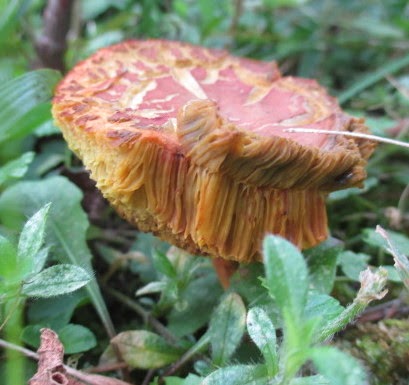 Although the picture isn't too clear, I spotted a Daddy Long-legs resting on the wood pole of the arbor. (It's on the left-hand side of the picture.) 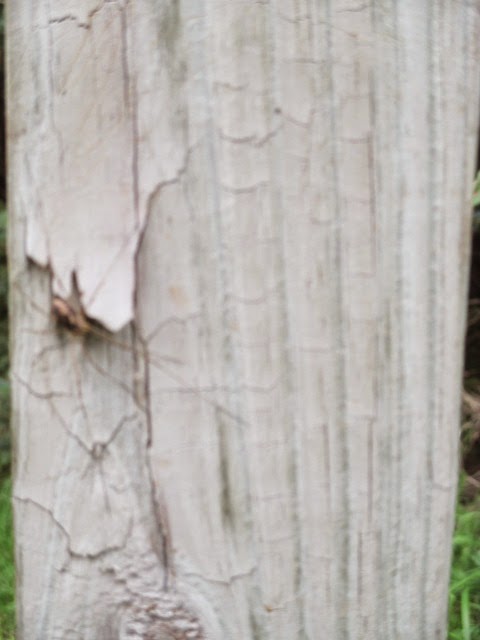 Sophia and Olivia were playing on the swings and I was determined to find some ants for them to observe. I finally did! Of all places, they were on the cover of the hot tub.

There were a couple of ants just walking around. 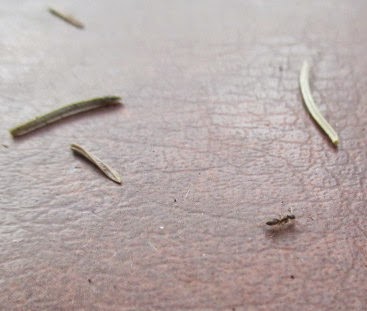 They were walking among the pine needles that had fallen from the pine tree next to the hot tub.

The girls came up from the swings and took a look at the very few ants that we could spot. We moved the pine needles and tried to find more ants. 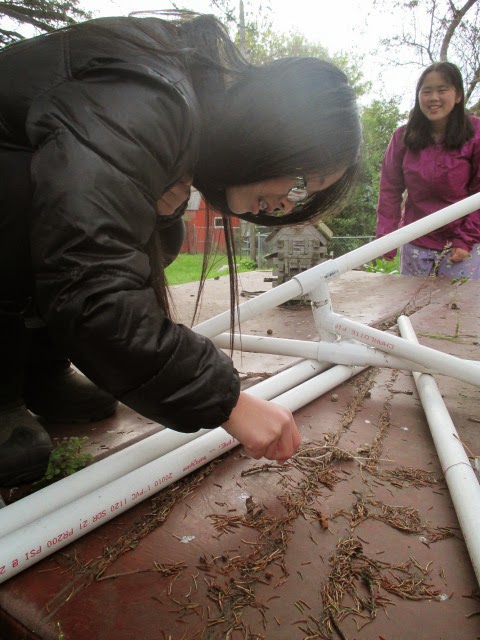 Then, interestingly, there was one ant that seemed to have a purpose. It was carrying a wing of another insect. It was holding the wing upright - like a flag - and made its way quite quickly across the cover. It was very determined to bring this wing somewhere despite the obstacles in its way. 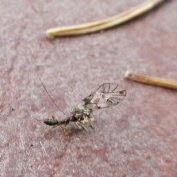 We noticed that all of the ants on the hot tub cover were about the same size. 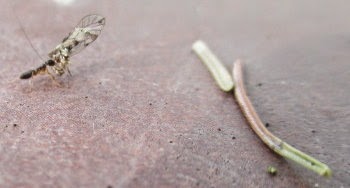 We used the original ant study on the Outdoor Hour Challenge as well as the newer version.

Posted by Harvest Moon by Hand at 7:07 AM

Thank you so much for your detailed description of your nature study time. It sounds like it was wonderfully interesting and productive! I am inspired

You did it again...so many wonderful things to observe in addition to your original ant subject. Thank you for sharing your entry with the OHC Blog Carnival.