Today was a rather light day in terms of our Countdown to Christmas. For the 11th day, we did the following things:

During the afternoon, I made 22 Swedish woven heart baskets that we will fill with Swedish fish when we visit the seniors at the nursing home on Friday, December 13th. 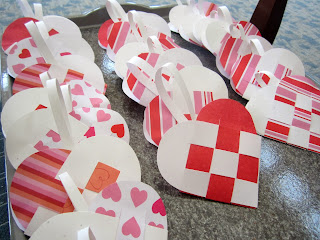 Woven baskets that will be given to the seniors on Friday
for St. Lucia Day.

Olivia began working on her Christmas ornament. It's a tree that she is embellishing with sequins and beads. She may add some embroidery stitches to it, but she isn't sure yet. 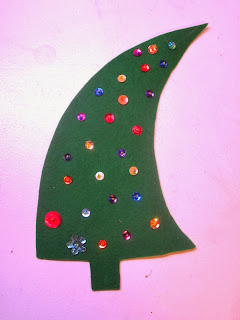 A Christmas tree ornament that Olivia is making.

I started putting together a family newsletter. To save money, we'll send it out to family and friends for whom we have email addresses. For those we don't, we'll send a copy of the newsletter in the mail.

In the process of writing the newsletter, it was good to look back upon all the positive things that have happened to us – individually and as a family – during the past year.

Sophia went to violin practice; and both girls had choir practice in the evening. The choir practiced songs for St. Lucia Day (to be celebrated on December 15th), the Sunday service that's filled with music on the 22nd, and Christmas Eve. Lots of singing during the next two weeks.

Luke 1:36-37 - "And did you know that your cousin Elizabeth conceived a son, old as she is? Everyone called her barren, and here she is six months pregnant! Nothing, you see, is impossible with God.”

And Mary said, "Yes, I see it all now: I’m the Lord’s maid, ready to serve. Let it be with me just as you say." Then the angel left her.

How do you know Santa is a man? (No woman would wear the same outfit every year!) A home decorated in Christmas lights that we saw last year
when we drove around at night to look at holiday lights.


In the United States, it became popular to outline private homes with such Christmas lights in tract housing (or housing developments) beginning in the 1960s. By the late 20th century, the custom had also been adopted in non-western countries, notably in Japan.
Posted by Harvest Moon by Hand at 5:42 PM

Very cute hearts and ornament.
I can remember when we were kids how we'd all pile in the car and drive around looking at the Christmas lights on people's houses. We'd also go downtown Minneapolis at night to walk around and look at the Dayton's windows. Dayton's was also THE place to go to see Santa. The whole of eighth floor would be decorated in some themed wonderland.
Ahhh! Memories! :)