Olivia is continuing with the poet and poetry study this year. This week we focused on John Greenleaf Whittier (December 17, 1807 – September 7, 1892) who was an American Quaker poet and advocate of the abolition of slavery in the United States. He was listed as one of the Fireside Poets, and was influenced by Robert Burns, a Scottish poet. 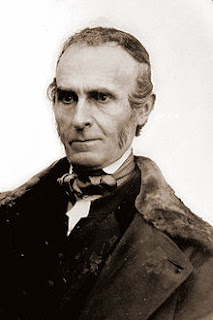 Whittier was first introduced to poetry by a teacher. His sister sent his first poem, "The Exile's Departure", to the Newburyport Free Press without his permission. This poem was published on June 8, 1826.

Whittier attended Haverhill Academy, and needed to raise money to do so. Whittier became a shoemaker for a time, and a deal was made to pay part of his tuition with food from the family farm. Before his second term, he earned money to cover tuition by serving as a teacher in a one-room schoolhouse. He attended Haverhill Academy from 1827 to 1828 and completed a high school education in only two terms.

During the 1830s, Whittier became interested in politics but, after losing a Congressional election in 1832 at age of 25, he suffered a nervous breakdown and returned home.

In 1833, Whittier published the anti-slavery pamphlet Justice and Expediency, and from there dedicated the next twenty years of his life to the abolitionist cause.

Around 1845, the stresses of editorial duties, worsening health, and dangerous mob violence caused Whittier to have a physical breakdown. Whittier went home to Amesbury, and remained there for the rest of his life, ending his active participation in abolition.

Below are six poems written by John Greenleaf Whittier. Olivia's thoughts about the poems follow each one.

O dearest bloom the seasons know,
Flowers of the Resurrection blow,
Our hope and faith restore;
And through the bitterness of death
And loss and sorrow, breathe a breath
Of life forevermore!

The thought of Love Immortal blends
With fond remembrances of friends;
In you, O sacred flowers,
By human love made doubly sweet,
The heavenly and the earthly meet,
The heart of Christ and ours!

Olivia thought:
- Definitely has the Spring beginning, Easter, new-growth kind of feel.
- Follows a rhyming pattern for most poetry.
- You don't expect the part about bitterness of death.
- This maybe would be something you would hear at church.
- The first stanza talks about Jesus's resurrection and how people felt before and during his death; and then how they felt when he was resurrected.
- I like some of the parts and there are other parts that I don't like as much.

Dry the tears for holy Eva,
With the blessed angels leave her;
Of the form so soft and fair
Give to earth the tender care.

For the golden locks of Eva
Let the sunny south-land give her
Flowery pillow of repose,
Orange-bloom and budding rose.

In the better home of Eva
Let the shining ones receive her,
With the welcome-voiced psalm,
Harp of gold and waving palm!

All is light and peace with Eva;
There the darkness cometh never;
Tears are wiped, and fetters fall,
And the Lord is all in all.

Weep no more for happy Eva,
Wrong and sin no more shall grieve her;
Care and pain and weariness
Lost in love so measureless.

Gentle Eva, loving Eva,
Child confessor, true believer,
Listener at the Master's knee,
"Suffer such to come to me."

Oh, for faith like thine, sweet Eva,
Lighting all the solemn river,
And the blessings of the poor
Wafting to the heavenly shore!

Olivia thought:
- Well, it is definitely talking about one person: Eva.
- It sounds like it is talking about her death and her life before she died.
- It also talks about her rebirth in heaven.
- Someone who is very close to her - like a family member - would be saying this poem.
- In the third stanza, it sounds like the angels are welcoming her to heaven.
- I think I like this one better than the other one. It was kind of easier to figure out.

Dream not, O Soul, that easy is the task
Thus set before thee. If it proves at length,
As well it may, beyond thy natural strength,
Faint not, despair not. As a child may ask
A father, pray the Everlasting Good
For light and guidance midst the subtle snares
Of sin thick planted in life's thoroughfares,
For spiritual strength and moral hardihood;
Still listening, through the noise of time and sense,
To the still whisper of the Inward Word;
Bitter in blame, sweet in approval heard,
Itself its own confirming evidence:
To health of soul a voice to cheer and please,
To guilt the wrath of the Eumenides.

Olivia thought:
- That one was certainly interesting. It is very different from the other two.
- This was harder to understand.
- It was a little confusing.
- It seemed very sad or dismal.

For the bass-relief by Preston Powers, carved upon the huge boulder in Denver Park, Colorado, and
representing the Last Indian and the Last Bison.

The eagle, stooping from yon snow-blown peaks,
For the wild hunter and the bison seeks,
In the changed world below; and finds alone
Their graven semblance in the eternal stone.


Olivia thought:
- Talking about the changes the world has gone through and the eagle is observing it.
- The eagle is seeing how much the world has changed because he no longer sees any of his friends.
- The poem is melancholy.
- I was surprised that the only thing that the eagle found was a stone monument that showed the pictures or carvings of the bison and Native American hunter.
- I think I like Eva first and then this poem second.

Voice of a people suffering long,
The pathos of their mournful song,
The sorrow of their night of wrong!

Their cry like that which Israel gave,
A prayer for one to guide and save,
Like Moses by the Red Sea's wave!

The stern accord her timbrel lent
To Miriam's note of triumph sent
O'er Egypt's sunken armament!

The tramp that startled camp and town,
And shook the walls of slavery down,
The spectral march of old John Brown!

The storm that swept through battle-days,
The triumph after long delays,
The bondmen giving God the praise!

Voice of a ransomed race, sing on
Till Freedom's every right is won,
And slavery's every wrong undone!

Olivia  thought:
- That was interesting. I thought it would be happier because of its title (Jubilee Singers).
- It talks a lot about righting wrongs that have been done.
- They are talking about the slaves and how they cried out to have someone save them.
(We looked up John Brown and his view of slavery. Comments follow what we read:)
- The next two stanzas are about people fighting to free the slaves.
- Ultimately the goal is to end slavery.
- I feel better about the title, but I still would pick a different one.

The Light that is Felt

A tender child of summers three,
Seeking her little bed at night,
Paused on the dark stair timidly.
"Oh, mother! Take my hand," said she,
"And then the dark will all be light."

We older children grope our way
From dark behind to dark before;
And only when our hands we lay,
Dear Lord, in Thine, the night is day,
And there is darkness nevermore.

Reach downward to the sunless days
Wherein our guides are blind as we,
And faith is small and hope delays;
Take Thou the hands of prayer we raise,
And let us feel the light of Thee!

Olivia thought:
- It sounds like the kids are afraid of the dark.
- She (the little girl) is seeking comfort from her mom.
- The older kids are seeking comfort from the Lord.
- The third one is about adults asking or praying for help from God.
- It goes from the youngest to the oldest in the poem.
- I liked the poem about slavery more and the meaning behind it.

Posted by Harvest Moon by Hand at 8:32 AM

I never cared much for his poetry. Too heavily religious in a weighted way. Not surprising being as he was a Quaker and certainly sounded like a devout one.