This week for the 49th week of the Nature Photo of the Week challenge, I chose the theme "Moon" from the list.

The remaining three themes are rather challenging ones given this time of the year. Honestly, I'm not sure yet how I'm going to find examples of them in the winter in Minnesota. 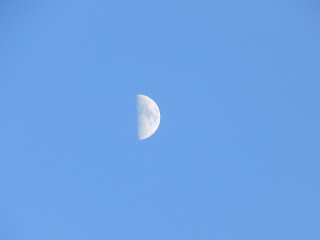 That being said, the weather has been beautifully mild here for most of the month. I have been enjoying it because it makes getting things done outdoors so much easier.

The photo this week was actually taken by Olivia. We were coming home from an activity and the moon was still high in the sky...or, rather, half of it was visible in the sky.

She grabbed her camera and took some photos. Rather than duplicating the same shot, it was easier to use her photograph.

The photo is untouched. That's how brilliantly blue it was that day.

Posted by Harvest Moon by Hand at 6:58 AM

Email ThisBlogThis!Share to TwitterShare to FacebookShare to Pinterest
Labels: nature, Nature Photo of the Week

So many days and nights were cloudy that it was difficult to get a picture of the sun or the moon for a while there--LOL!
Beautiful shot with the blue sky.